Feral hog hunting is getting to be more and more common. In fact in most areas they are reproducing faster than rabbits. Most land owners want them eliminated because they eat the same foods necessary for deer. Not only that they eat the roots and the food does not come back up. They are a disaster in the making because in some areas this competition for food is decreasing the deer herds and reducing the quality of the ones left.

Feral hogs in the area makes it necessary to put up substantial hog wire fences around any automatic mechanical deer feeders. To help detour wild hogs to a different feeding area and to set them up to hunt make up a feed using fermented corn. Start with a jar of malt, add two cups of sugar and a packet of yeast. Finally add a gallon of water, cover lightly and let sit until the fermenting scent is strong. Do not tighten the mix we do not want a bomb here. Add the fermenting  liquid to a container with 50 pounds of corn. Stir and cover. If more water is needed to get even coating on the corn add a little.  Make a decision where you want the hogs to congregate and make several three foot deep holes in the ground with a post hole digger. Add enough water to the hole to moisten the earth nearby and fill the holes up to about 6″ from the top with the corn, then fill the rest with dirt. water the top dirt to just moist and wait. Depending on the number of holes made this will keep hogs busy for some time and they will continue to root where they smell the fermentation and ignore the feeders.

The encouragement of land owners have made hog hunting more popular however a great drawback to killing a feral hog or Javelina is dealing with their fleas while dressing and butchering. Some people douse themselves with DEET and put rubber bands around shirt and pant legs but fleas can jump long distances.

I have found that after killing a pig or Javelina that by carrying an aerosol can of pyrethrum (extract from the African Daisy) based insecticide that spraying all surfaces of the pig right after the kill and letting it sit for a while the fleas either die or leave.

Pyrethrums  are “Generally Accepted As Safe” and are classified in the “Least Toxic” category by the EPA, the same as table salt. In addition it breaks down quickly by sunlight and the skin is going to be stripped off and discarded anyway. Of course wash the carcass before storing, don’t eat the spray, and stand up wind while spraying.

Once exposed to the natural environment, the Pyrethrum degrades to leave nothing harmful to accumulate in the environment, the natural food chain, or in our food supplies. This combination of lethality and non-persistence makes it a near perfect insecticide. These features make them good for use during hog hunting and deer hunting.

That out of the way another tip to hog hunting is, use a rifle and try to get head shots. Most feral hogs are small and do not have a lot of meat so a head shot saves the most meat. If bow hunting you might want a bigger target so go for the lungs just behind the elbows.

A rifle is a safe way to harvest hogs caught in a homemade hog trap.

The hunter can go hog hunting year round most places as there are no seasons of which I know. 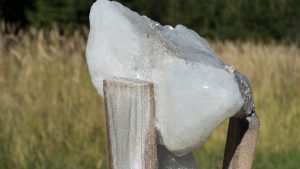 Artificial salt licks can be made from plain granular salt 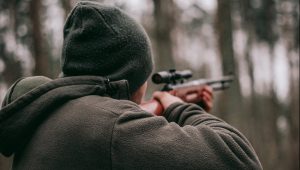 The Ten Commandments of Gun Handling 1. Always keep the 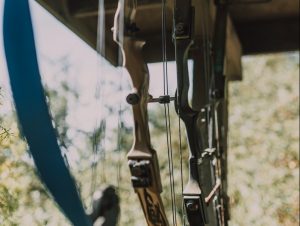 If prospective bow hunters are just starting or thinking about